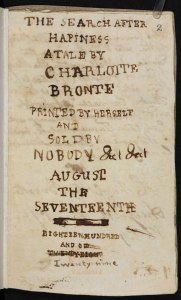 Have you ever been on a blind date with a book? I recently went on my first one thanks to an event my library had organized for Valentine’s Day. Many libraries and bookstores are playing Cupid with their patrons in the month of February by offering them the opportunity to go on a blind date with a book. Books are wrapped in brown paper to conceal their identity. You have to commit to reading a book without knowing its title or author. A genre or basic category could be marked or there could be a vague description or a few keywords pertaining to the theme to create mystery and suspense and pique your interest. Often we pick a book based on the cover but cover art can be distracting and even misleading by giving us the wrong impression of the content. As the old adage goes, never judge a book by its cover. Besides, who doesn’t like surprises? If you are someone who restricts yourself to certain genres, you could open up a new world by reading something you wouldn’t have read otherwise. You rate the date when you return the book after reading. You never know, you may meet your perfect match. And no hard feelings, if it doesn’t work out. Abandon the book and move on to the next one.

So, what book did I end up with? I was attracted to the cover that had the words ‘Storytelling and Fantasy’ on it. As I ripped off the brown paper, I saw a thin book entitled The Search after Hapiness ( I’ll get to the spelling mistake in a minute) and the author none other than the famous Charlotte Brontë. I have read, re-read and enjoyed the timeless classic Jane Eyre countless times. I can confidently say that it was one of the first books that made me a lifelong reader. If you take a random survey and ask people to name their hundred greatest books , I’m sure Jane Eyre would be included in many a list. I have also read The Professor and Villette by Brontë but I had never heard of this book before. For me, it was love at first sight as soon as I saw the name of the author. I was even more delighted to discover that the tale in front of my eyes was written by Charlotte Brontë in 1829 when she was just thirteen years old.

In the introduction to the American edition of the book, T. A. J. Burnett explains how the motherless Brontë children engaged in games of make believe to occupy their time in the remote moorland parsonage where they were raised. In June 1826, their father gave them a box of twelve wooden soldiers as a gift. The lonely and isolated children were very imaginative and they created a fictitious city called Glass Town that was conquered and colonized by their twelve heroes. The children themselves were the four genii who presided over the inhabitants of the city. Their games were inspired by the stories in The Arabian Nights which was part of their father’s library collection. Charlotte’s brother, Branwell Brontë, wrote a detailed account of these made up stories in a work entitled, The History of the Young Men from Their First Settlement to the Present Time. The Search after Hapiness is not part of the Glass Town stories but according to the preface to the tale by Brontë, the action is set in Glass Town and Charlotte’s favorite toy soldier named ‘The Duke of Wellington’ has an important role in the story. Brontë wrote the tale in her own hand and in minuscule letters in imitation of print. Her spelling and punctuation errors have been retained in the American edition of the book. The original manuscript has no illustrations but this edition has exquisite watercolors by artist Carolyn Dinan that add to the charm of the tale. When I started reading the book, I immediately noticed the glaring spelling mistakes and the long, winding sentences. I’m glad the editors decided to retain the errors as I think they help convey the youthfulness of the writing and enable us to understand the budding creativity of the author. I was also struck by Brontë’s impressive vocabulary and vivid imagination. The young girl couldn’t spell but she certainly had a way with words.

As I started reading the tale, it seemed like I was flying on a magic carpet to the world of The Arabian Nights. I came across magnificent palaces, lush gardens, a subterraneous passage with a stone rolled to the entrance, globes of light and, of course, there was a magic genie thrown in for good measure. The plot itself is incongruous and implausible. Henry O Donell is a young man who leaves behind the city and the people he loves to go on a quest of happiness. During the course of his adventures, he meets Alexander de Lancy, a native of France, who is on a similar pursuit of happiness. They decide to travel together and come across a very old man who narrates his story of enslavement and release to them (the device of a tale framed within another tale is also reminiscent of The Arabian Nights). For some inexplicable reason or by a quirk of fate, Alexander gets separated from Henry. The latter, meanwhile, feels very nostalgic for the home he has left behind and bursts into tears. A mighty genie stands before him, ready to grant his wish and he is instantly transported back to his castle where he coincidentally bumps into Alexander who has become a rich merchant in Paris. And needless to say, they lived happily ever after in their separate cities. The search after happiness brings them back full circle to their own homes.

This book will not appeal to readers who are not familiar with the works of Brontë. In fact, they will probably dismiss the tale as puerile and absurd. It is replete with spelling errors and the rambling descriptions and the problematic syntax make it even more tedious to read. But for those who know Brontë and have enjoyed her oeuvre, it is a fascinating window into the mind of an imaginative and gifted child who would grow up to become one of the most celebrated authors of all time. It is also noteworthy that the story includes Charlotte’s earliest known poem, “In this fairy land of light.” The tale written through the eyes of a thirteen year old helps humanize an author whose reputation has grown to mythic proportions. The book made me wonder about the early writings of other famous authors and how reading juvenilia might help parents and teachers identify and encourage talent at a young age. As far as rating my date goes, I would say it was meant to be. I had no idea such a book existed and as I am a big fan of Charlotte Brontë, it was truly a match made in heaven!